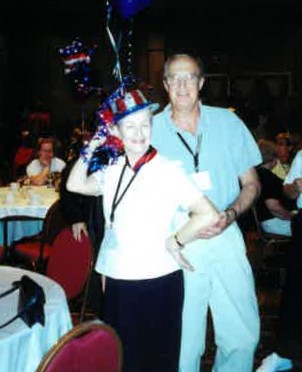 You may not know Gene and Fausta Deterling, but they changed your life and the life of your child with PWS.  “Curtis has Prader-Willi syndrome.”  The Deterlings stared at their doctor in disbelief when they heard those words in 1971. Gene was an engineer and a manager, a problem solver.  “Can’t we do something?”  That became their mantra – and do something is exactly what they did!  There were only four articles on the syndrome published at that time, no organization of families or professionals, and no Internet.

Curtis’s physician referred the Deterlings to a dietician at Boston Children’s Hospital, and she connected them with Peggy Pipes, a dietician in Seattle who had recently developed a plan that could save Curtis’s life.  Peggy Pipes worked with Vanja A. Holm, M.D., at the Child Development and Mental Retardation Center in Seattle, Washington, and developed a dietary plan that proved children with PWS could lose weight.  These two women, a Texan and a Swede, did what a decade and a half of male doctors had failed to do: fend off the deadly obesity of Prader-Willi syndrome.

During their trip to Seattle, the Deterlings met with other parents and professionals who were acquainted with the syndrome. These few individuals formed a group called “Prader-Willi Syndrome Parents and Friends,” a name later changed to the Prader-Willi Syndrome Association. That same year the group officially incorporated, officers were appointed and a Board of Directors was established. The first member registered on May 1, 1975.  More information on those early days can be found in the January-February 2000 Gathered View, including an article contributed by Gene Deterling, as PWSA | USA celebrated their 25th anniversary.

In keeping with Gene’s mantra, “Can’t we do something?”, as Curtis and the children of the other families grew older, he knew they would need a home of their own.  Fausta, along with two other moms, Karen Virnig and Lois Olson, agreed to take on this project.  The hat was passed at a meeting of the Minnesota parents and they had $17 to begin!  Karen remembers that “Fausta was a huge part of the team.  She was quiet, but she handled details efficiently and effectively. Fausta made a quiet suggestion to have a logo for Oakwood, and came back a short time later with the finished product designed by their son, Evan Deterling.  Fausta was the Oakwood Board Secretary for years.  Our checks required two signatures, one a Board signature.  Fausta signed checks all those years that Oakwood was in Minnetonka, never missing a bi-weekly payday.”

The Oakwood Residence in Minnesota opened in the fall of 1980.  This was the second earliest and only long-term group home for PWS-specific residents.  They had 15 residents and virtually no turnover for the approximately 15 years of its existence, before Minnesota pushed for less restrictive environments in 2001.  Oakwood was broken into multiple neighborhood homes of four persons or less.  Most became and still are AME group homes, founded by Marty McGraw.  The Deterlings partnered with Joan and Jim Gardner and their son Larry was placed in one of the first small group homes as well.  Oakwood became the model for PWS residential management for years.

Joan recalls:  “Gene was the instigator of the annual picnic at a park here.  He always insisted on bringing special corn and supervised the shelling and cooking of the corn.  The kids happily joined in on the shucking.  They also loved the games, diet soda cooler, and grilled chicken sandwich.  It culminated in a watermelon spitting contest.  You saved five seeds to spit the farthest, supervised by serious judges.  This was almost a tragedy when I supplied some new special watermelons.  Unfortunately, they were seedless!  Gene rushed down to his corn connection and returned with suitable substitutes.  Needless to say, no one cried over having two extra slices of watermelon.”

Gene had a full professional life and career beyond his volunteer work with PWS.  He was a United States Air Force meteorologist with the rank of Captain, and an electrical engineer and marketing executive at Honeywell Corporation.  Fausta was the quiet support and partner to Gene.  Joan describes her as “a lady in the true sense of the word.

She would quietly stand beside Gene…and only roll her eyes occasionally as he was on ‘fixed destination.’  She was truly a quiet hard worker: the kind that you want to give a job to because it would get done calmly, quietly and on time.  She showed up with Gene for every event and patiently managed Curtis.”  Fausta just made things happen without any fanfare and never taking credit for getting things done.

Gene served on the Board of Directors of PWSA | USA from 1975-1989.  He held the role of President (1975-1980) and Treasurer (1980-1984).  Fausta was a board member from 1977-1989 and served as Secretary from 1975-1992.  As Janalee Heinemann recounts: “What we appreciated the most about Fausta was that she knew shorthand and took wonderful handwritten minutes of the meetings for years.  We did not appreciate her enough until she no longer was in that role.”

Gene died on September 24, 2018 at the age of 87.  Fausta still lives in Minnesota.  Upon Gene’s passing, Jim Kane, Chair of the Board of Directors for PWSA | USA, wrote:

“To the generation of families with members with Prader-Willi syndrome who knew Gene, we all knew him to be the finest gentleman and most caring father.  He was a true founder of PWSA | USA and we are eternally grateful for his initiative, foresight and energy. To the generation of families who did not have the great honor of knowing Gene, they owe Gene a tremendous debt for the organization of a worldwide organization that is thriving today to support people with the syndrome and their families. We all will miss him dearly.”

Gene and Fausta Deterling’s dedication and tireless work has blessed all of our U.S. families.

Credit to John Hernandez-Storr, How Parents and Professionals Struggled and Coped and Made Genetic History.