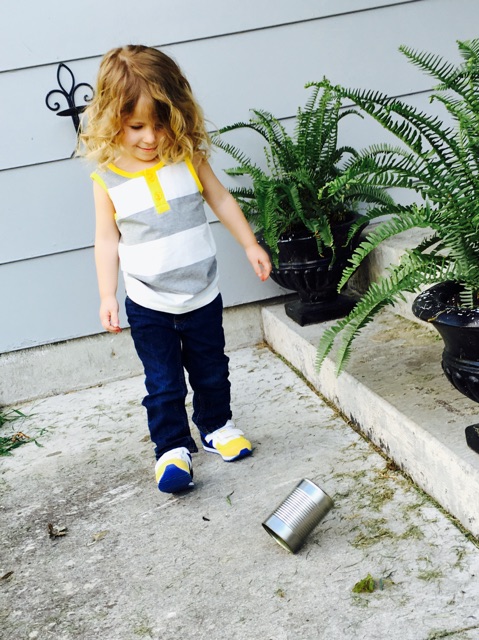 Written by: Sara Grosso
For the last few months I’ve focused on modeling an active lifestyle and healthy eating choices for Grayson. Running is beginning to become a habitual part of my daily routine. The length and route of each run depend entirely on what kind of “adventure” takes place between the hours of 5:00 and 8:00 a.m. – As it turns out, “adventure” in our home  actually looks a lot like a soon-to-be 3-year-old deciding to hand wash his underwear, or truck collection, or dinosaurs in the toilet bowl as his breakfast plate is being rinsed off. Some days, the clean-up from these “adventures” can make squeezing in a run a little tricky..

Recently, on a morning with minimal toilet bowl mishaps, I was able to hit the pavement over my lunch break. I found myself at the bottom of a pretty steep hill, with a very shallow pool of motivation. So I started bargaining with myself.

I’m writing this post, so I obviously survived that run, and several more afterward, using this same self-bargaining system.

This theme of segmented progress presented itself again a few weeks ago. With some family seated around a small bonfire in my back yard, I overheard my widowed father being asked how he was doing in that tone that implies the person asking is actually inquiring about his loss. I’ve heard him answer this question countless times since my mother’s passing nearly a year-and-a-half ago, but his response was different this time.

He explained he was just “kicking the can”- Just giving the can a nudge with his foot and making his way to it before nudging it just a little further.

I had been doing this recently on runs- sans the physical can.

But I had been “kicking the can” with PWS from the day we were given Grayson’s diagnosis.

From the jump, parents given this same diagnosis are threatened by this avalanche of fear and sudden influx of informative fliers and blizzard of names; names of doctors, therapists, support groups, of other families of children with PWS.. It was tremendously overwhelming.

I remember launching into anxious ponderings about the “small potatoes” of the realm of worries that come with the territory of parenting a child with PWS. How his peers would treat him in school? Would he be teased or bullied? Would he make friends?

On receipt of diagnosis, I could feel the fight or flight instinct trying to kick into gear. I knew I’d fall subject to “flight” if I didn’t draw myself back in from this fearful mentality quickly. In order to be ready to battle PWS with Grayson, I needed to make some decisions about my attitude.

I started by identifying the most significant source of my worry about what this diagnosis meant for Grayson.

I was afraid this diagnosis meant he had no individuality or that he would never be self-sufficient, etc.

Realizing that ultimately, I wanted what every other parent wants for any of their children, independence, was the breath of relief I needed. This is a universal goal of parents to all kinds of children. I had found a loophole to this rare genetic disorder that  leveled the parenting playing field for me.

I was standing at the bottom of one of the largest hills in the landscape of our lives and Grayson’s independence was perched at its crest. I wasn’t trained for this run. I would never expect to complete a marathon without training. But I harnessed my new attitude, picked a spot on the hill of PWS and started making my way to it. We “kicked the can” as we worked with him to feed, to crawl, to build an immune system that could fend off illness, to learn about nutrition and adjust his diet, to speak, to walk, as we searched for the right babysitter, and now, we’re in the middle of kicking the can into the front doors of pre-school.

I am not an expert on raising a child with PWS. In fact, most days I’m winging it at best – and I’m okay with that. Why? Because that’s all any of us parents are doing anyway! Rather than letting that avalanche of alarm crush us, and being made to feel like we have to be experts on all aspects of PWS upon receipt of diagnosis, we have scaffolded our self-education of PWS. We have a healthy knowledge base of PWS, but we pride ourselves on being experts on “Grayson”. We learn as we go, as we “kick the can”.

Through his resilience, his stubbornness, his perseverance, and determination as we push a little harder and further toward the goal of his independence, he has shown the individuality and strong will I had initially feared would be lacking. Observing him be has enabled me to relax just a little more, to replace fear and anxiety with the peace and courage needed to continue to learn, advocate, educate, and care for Grayson. We’re just going to keep kicking that can one day at a time!