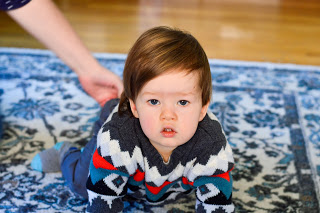 One night last week, I had a moment where, for the first time in his 18 months of life, I thought, “I wish Henry didn’t have to have Prader-Willi Syndrome.” It was a guilty thought, and was accompanied by more than a few tears. I’m not sure if they were tired tears, third-trimester tears or actual sad tears, but they were there nonetheless.
Trust me, I have wondered what Henry’s life would be like without his condition many times. But I’ve always countered the thoughts with, “Well, Henry wouldn’t be Henry without it.” But that night, seconds before the hot tears began soaking my pillow, the thought occurred to me: what if Henry could be exactly himself, but also able to walk. Able to eat a cupcake, or spaghetti with big, fat noodles like the rest of us? Same personality, same long hair and big blue eyes, but more normal. Now, unless you have a child with a condition like Henry’s, you don’t know how much it stings to hear the “n” word come from someone’s lips, and how especially abhorrent it is to feel it creep up inside your own brain. Yet, there it was resounding in my mind like a huge gong had just been rung on a mountaintop.

So, I did what Katniss Everdeen does in the third book of the Hunger Games trilogy (okay, not exactly, but the same basic idea), and repeated the same few phrases that I’ve clung to so often on this journey: “Henry’s still Henry. God is still God. And even if all I can do right now is just keep going, that’s what I’ll do.”

I was warned by an old friend that there would be days like the one I had last week. That this life we have as parents of children with special needs is a roller coaster, and there will be a fair share of both high and low days. That’s when we just keep going. Don’t wallow in the sadness, but wade through it. Trudge through the muck, because soon enough, you’ll be on your way up again. By God’s grace, life with Henry has been so full of highs with only the occasional drop along the way.

It was a morning a few days later that I was given a truth that I’ll forever hold on to. I was encouraging a new mama whose own roller coast seemed to be taking a dive, and I myself was reminded of the gift it is to have a child with a disability. “There are things we’ll get to learn about our boys that we never would have even noticed without their PWS.”

Boy, am I thankful for the Holy Spirit who teaches and reminds me of good things, because I would NEVER have been able to say that, or even feel that way without His leading in my life. Still, it couldn’t be more true!

Here are things I know about Henry. He’s a hard worker. He’s patient. He’s determined. He’s easy-going, and teachable. He doesn’t stay mad, but is quick to laugh or make a joke. I could go on, but I think you get the point. Now, ask me how I know those things. Because every week in therapy, I see that look in his eyes as he’s crawling across the rug. I watch as he tries and tries to get that plastic coin in the slot of the singing piggy bank, and share in his joy when it finally meets its mark. And even when he’s been pushed further than he wanted to go, and our P.T. tells me I can pick up the crying boy, all it takes is a hug and a kiss for Henry’s sweet smile to emerge from underneath his tears.

I am so thankful for the change God has placed in my heart, and the wisdom He’s given in these rare circumstances of our everyday life. And, when this new boy comes in May, when he crawls for the first time and never looks back, or when the first step he takes is a running leap (the way he kicks, I wouldn’t be surprised!), I’ll be able to rejoice all the more in the way the human body was meant to develop, and how perfectly we are all formed by the Creator of the universe.Those are just a few things I wouldn’t know if Henry were a regular 18-month-old. The pride and joy I feel every time Henry attempts to crawl for a toy, would’ve been lost on that single, solitary moment of the first time. And, if Henry were walking right now, I wouldn’t be rejoicing with every step like I know I will when the day really does come. I’d probably be wishing that he would’ve taken longer to learn the skill! There is so much joy in waiting. In anticipating and watching as the tiniest developments lead into big ones.

Henry is Henry, and this new boy will be himself too. And I will go through my life in wonder, awe and worship of the God who gave me the gift of motherhood to such unique, perfect little lives.

From The Everett Day Life Blog