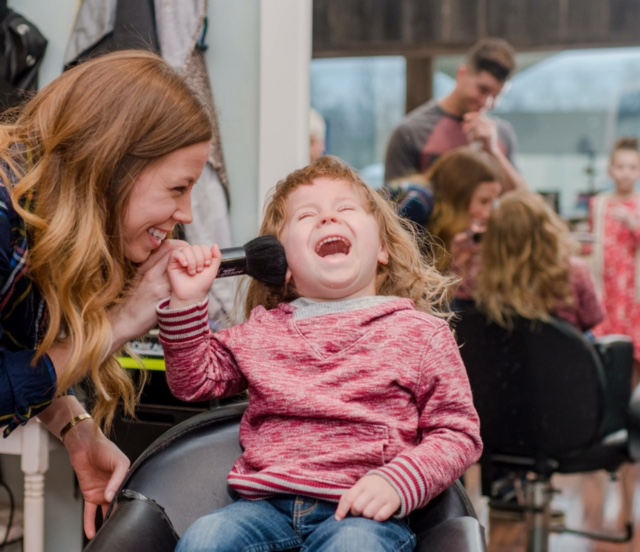 When Grayson was born, I remember being shocked that he had a headful of tiny, dark ringlets of hair. I wasn’t the only one; His nurses and visiting family and friends always made such a fuss over his curls. They were unexpected. And beautiful.
Weeks later, after an extended stay in the NICU and PICU of our local children’s hospital, a doctor “kindly” delivered a soul crippling diagnosis.
“Good news! The lab work is back! Your son has Prader-Willi Syndrome.”
The doctor proceeded to forewarn me that children with Prader-Willi Syndrome suffer from Hypotonia, poor muscle tone, a condition that would severely delay achieving fine and gross motor milestones.
“I would not anticipate him to walk until age 3. Maybe later.”
Grayson took his first steps independently at 20 months, 3 weeks before his sister was born.
Walking grew to running. Ringlets turned to spirals. As he grew and achieved, so did a library of mental images that I wear on my heart. An image of his long, strawberry blonde hair trailing behind him as he ran giggling from me, one of curls hanging around his face as he leaned over “reading” a book he held in his lap, another of him wiping it from his eyes to kiss his baby sister, and several of a glowing halo created by the backlight from a sunset or Christmas tree lights shining through his mess of hair.
His hair symbolized life, freedom, and strength in spite of his diagnosis.
Aside from the fact that is was swoon worthy, his hair was his trademark that shifted the focus away from his genetic disorder. “The little boy with the long, curly hair” was a much easier label to stomach than “the little boy with whatever that syndrome is.”
Strangers would ridicule me for letting his hair grow so long. I was stopped countless times to be given unsolicited advice on how to make him look like “less of a girl” because apparently, “boys have no business having long hair”..
I always let their remarks roll off my back; They had no way of knowing that at birth, he struggled to thrive so badly that I feared never seeing him have his first haircut. They had never been a fly on the wall of my son’s nursery during times he was ill, while I rocked him and cried from worry about what his future held. They couldn’t fathom how emotionally attached his mother had become to his hair because she saw it as a badge of courage that was solely his to claim. He had grown it himself as he determinedly worked through countless hours of therapy. It served to chronicle all the work he had done to achieve the milestones I had been warned would be overdue.
His growing hair contradicted the idea of incapability this doctor had suggested. It was tangible when his achievements were few and far between. Watching it grow as he achieved gave me hope where an insensitive doctor had broken my spirit.. And so, in some ways, I viewed his hair as his “magic power” of competence and the companion to the curse of living with PWS. Almost like Rapunzel. Think “Tangled” the movie, people.

Grayson had an accident at the turn of the year in which the entirety of his forehead was badly burnt. He lost a significant amount of hair and, frankly, it was as devastating to me as if he had lost his vision. His badge of courage had gone up in flames. His proof of hardship was destroyed. I struggled with the decision to cut the remainder of his hair and ended up putting it off until just recently.
After his haircut (which I may have made a moderate production of) I realized that I subconsciously had been camouflaging Grayson’s genetic disorder with his hair because of its notoriety. With it removed, his little head, in all his naked looking glory, was still insanely handsome and my heart was just as swollen with pride and love as it ever had been. I feel free as a bird (and I think Grayson digs his new look, too!)